There is just a bit anxiety in the Cat Cafe Nurri. Something is up. But what? Cats are promenading there and back. One big wall is all cleared up and the ladder has been brought, some old newspapers and one particularly tasty eraser and these pencils. Something is definitely up.

The lady of the Cat Cafe – lovely Helen has brought the whole bucket of black paint and pencils. Idea that was planned for a few weeks, are becoming a reality. Idle Cats are “coming” on the walls – big, black and under the strict observation by the committee of
whisker-bearers.

The first five Idle Cats took 6 hours to paint. When the Cafe was already closed some time ago and I was finishing the @cat I turned around from my high point under the ceiling and looked down – 7 pairs of shiny eyes were watching! The committee was approvingly silent. Since these wall-paintings took so much time, the real cats had their beauty snap during and Kipsuke, the youngest of them, slept so nicely in the position of the Idle @cat

It is different, to paint on the wall than on the paper, but so exiting and so nice is to draw lines with brush. Cats thought that it would be nice to walk through the black paint and leave some marks of their own but we made a deal – if they are up to go and make paw-marks on the ceiling, it is very fine. But since they did not want to do that, the contract ended there.

The most recent cats are 3 big yellow cats, including the Idle Cat itself. There are still room for some (there are 15 Idle Cats, on the walls at the moment are 10). Time will show how or when on where these last ones appear, and it depend also of the others, how they behave on the walls.

The most big thanks to the Cat Cafe Nurri and its lovely mistress Helen, for allowing Idle Cats cat design stay in the cafe! 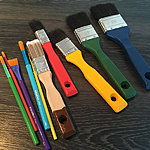